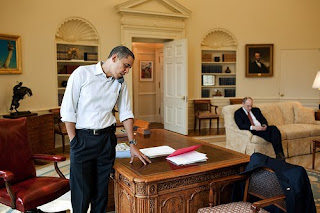 Obama today
Update: NOW is incensed at Obama, to which I say suck it up and shut up. I'm so tired of all these niche groups complaining that they're not getting what they want. It was Stupak deal or no healthcare. Did NOW bother to notice how difficult it was to get enough votes? Americans don't want their tax dollars paying for abortions.
Update: Obama will speak tonight after House votes, which is expected after 9 pm eastern.
Stupak says an agreement has been reached. He said that he didn't negotiate directly with Obama. All negotiations were done through Bob Bauer, White House counsel. Way to go Bauer!
The votes are in. Health reform is about to passed.
If Joseph Cao has any integrity, he will vote yes on healthcare because he said the abortion language was all that was standing in his way (Update, he is a no vote). Believe it or not, republicans are still saying a yes vote for health bill is a yes for abortion funding. Yes they are. Republicans say an executive order is not enough. Such trolls.
Take note of the No voting democrats here.
Here's Stupak. See Obama's executive order below:

By the authority vested in me as President by the Constitution and the laws of the United States of America, including the “Patient Protection and Affordable Care Act” (approved March __, 2010), I hereby order as follows:

Section 1. Policy. Following the recent passage of the Patient Protection and Affordable Care Act (“the Act”), it is necessary to establish an adequate enforcement mechanism to ensure that Federal funds are not used for abortion services (except in cases of rape or incest, or when the life of the woman would be endangered), consistent with a longstanding Federal statutory restriction that is commonly known as the Hyde Amendment. The purpose of this Executive Order is to establish a comprehensive, government-wide set of policies and procedures to achieve this goal and to make certain that all relevant actors—Federal officials, state officials (including insurance regulators) and health care providers—are aware of their responsibilities, new and old.

The Act maintains current Hyde Amendment restrictions governing abortion policy and extends those restrictions to the newly-created health insurance exchanges. Under the Act, longstanding Federal laws to protect conscience (such as the Church Amendment, 42 U.S.C. §300a-7, and the Weldon Amendment, Pub. L. No. 111-8, §508(d)(1) (2009)) remain intact and new protections prohibit discrimination against health care facilities and health care providers because of an unwillingness to provide, pay for, provide coverage of, or refer for abortions.

Numerous executive agencies have a role in ensuring that these restrictions are enforced, including the Department of Health and Human Services (HHS), the Office of Management and Budget (OMB), and the Office of Personnel Management (OPM).

Section 3. Community Health Center Program. The Act establishes a new Community Health Center (CHC) Fund within HHS, which provides additional Federal funds for the community health center program. Existing law prohibits these centers from using federal funds to provide abortion services (except in cases of rape or incest, or when the life of the woman would be endangered), as a result of both the Hyde Amendment and longstanding regulations containing the Hyde language. Under the Act, the Hyde language shall apply to the authorization and appropriations of funds for Community Health Centers under section 10503 and all other relevant provisions. I hereby direct the Secretary of HHS to ensure that program administrators and recipients of Federal funds are aware of and comply with the limitations on abortion services imposed on CHCs by existing law. Such actions should include, but are not limited to, updating Grant Policy Statements that accompany CHC grants and issuing new interpretive rules.

Section 4. General Provisions. (a) Nothing in this Executive Order shall be construed to impair or otherwise affect: (i) authority granted by law or presidential directive to an agency, or the head thereof; or (ii) functions of the Director of the Office of Management and Budget relating to budgetary, administrative, or legislative proposals.
(b) This Executive Order shall be implemented consistent with applicable law and subject to the availability of appropriations.
(c) This Executive Order is not intended to, and does not, create any right or benefit, substantive or procedural, enforceable at law or in equity against the United States, its departments, agencies, entities, officers, employees or agents, or any other person.