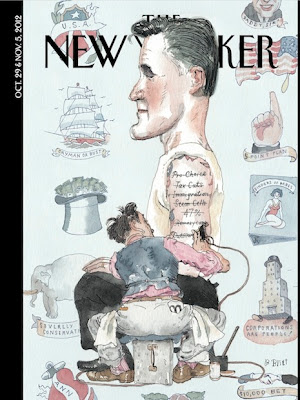 Ahead of Monday's foreign policy debate, here are things to know about Mitt's foreign policy. As a broad overview, Mitt's foreign policy would be the return of Bush-Cheney foreign policy. Get a look at his foreign policy advisers.
Romney's also indebted to Sheldon Adelson, whose chief goal is to bomb Iran. Adelson is the Las Vegas casino mogul who has donated upwards of $100 million to Romney and the GOP.
Mitt blew a simple visit to Europe, which Romney apparently loathes anyway. His visit, which was an attempt to boost his foreign policy cred, was referred to as RomneyShambles.
The entire Benghazi criticism is political, meant to cover for Mitt's lameness out of the gate when he wrongly attacked the president during a crisis. Now the attack has been turned into a dog whistle. It's meant to say that the president is soft on terror, so soft (unAmerican) that he can't even say the word.
Here's a list, as of January, of the terrorists killed on Obama's watch.
A Mitt presidency likely means a return to torture. I can never understand how the GOP advocate for cells that aren't even born, even in cases of rape and incest, and yet they're fine and dandy with torture. For me, that's good enough reason to vote for Obama. Republicans say all life matters. But the life of a pregnant teen, for example, doesn't matter, because the republicans don't believe in safety nets. They just believe in self-righteous preaching about marriage. I could understand if they were strong advocates of adoption and fixing the foster care system, but they're not. They don't even believe gay people should adopt. They don't even care about gay people, who are actually living.
Romney doesn't seem to care about 47% of the people who are living.
Republicans are also okay with the possibility of putting a possible innocent person to death--DNA has vindicated many people on death row. As far as I can tell, they're hypocrites. You can't pick and choose which life to care about. Not only is torture morally wrong. It's a failed policy.


Romney doesn't believe in the possibility of peace in the Middle East.

Mr. Romney also declared that he would “not authorize torture.” At the news conference afterward, a reporter pressed him to say whether he thought waterboarding was torture, and Mr. Romney replied, “I don’t.”

That comment appeared to align Mr. Romney with a practice by the executive branch, under President Bush, of defining torture narrowly and saying the harsh treatment it inflicted on detainees fell short of that level. By contrast, Mr. Obama has embraced a more expansive conception of the suffering that is off-limits.

“Waterboarding is torture,” Mr. Obama said in November. “It’s contrary to America’s traditions. It’s contrary to our ideals. That’s not who we are. That’s not how we operate. We don’t need it in order to prosecute the war on terrorism. And we did the right thing by ending that practice. If we want to lead around the world, part of our leadership is setting a good example.” NYT