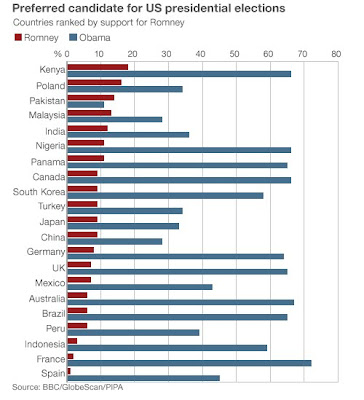 When Obama took office, republicans created a fictional Obama to rally against. Part of that delusion was the belief that world leaders don't respect Obama. Now that the election is tight (I don't think it is as close as it appears), world leaders are scratching their heads:


As President Obama and Mitt Romney prepare for a Monday debate on foreign policy and polls show the Republican challenger with a real chance of victory in two weeks, many observers abroad are saying: Wait, what?

From Europe to China to the Middle East, perceptions of the contest have lagged behind indications that the two men are in a virtual dead heat. Obama remains widely popular abroad, and there are signs that many leaders are unprepared for a Romney presidency. WaPo 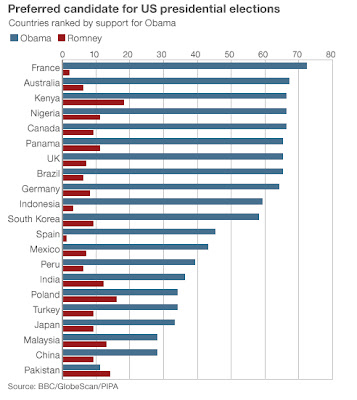 In a world poll, Romney is only liked more in Pakistan. That's probably because Mitt said he wouldn't go into Pakistan to get bin Laden.

What many republican voters don't know - 270 to win: