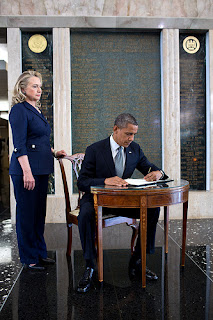 Obama on Sept. 12, signing a presidential proclamation honoring victims of the Benghazi attack

This is an excellent list, compiled by Washington Monthly. See the top three and the rest here.

6. Eliminated Osama bin laden: In 2011, ordered special forces raid of secret compound in Abbottabad, Pakistan, in which the terrorist leader was killed and a trove of al-Qaeda documents was discovered.

7. Turned Around U.S. Auto Industry: In 2009, injected $62 billion in federal money (on top of $13.4 billion in loans from the Bush administration) into ailing GM and Chrysler in return for equity stakes and agreements for massive restructuring. Since bottoming out in 2009, the auto industry has added more than 100,000 jobs. In 2011, the Big Three automakers all gained market share for the first time in two decades. The government expects to lose $16 billion of its investment, less if the price of the GM stock it still owns increases.

8. Recapitalized Banks: In the midst of financial crisis, approved controversial Treasury Department plan to lure private capital into the country’s largest banks via “stress tests” of their balance sheets and a public-private fund to buy their “toxic” assets. Got banks back on their feet at essentially zero cost to the government.

10. Toppled Moammar Gaddafi: In March 2011, joined a coalition of European and Arab governments in military action, including air power and naval blockade, against Gaddafi regime to defend Libyan civilians and support rebel troops. Gaddafi’s forty-two-year rule ended when the dictator was overthrown and killed by rebels on October 20, 2011. No American lives were lost.

11. Told Mubarak to Go: On February 1, 2011, publicly called on Egyptian President Hosni Mubarak to accept reform or step down, thus weakening the dictator’s position and putting America on the right side of the Arab Spring. Mubarak ended thirty-year rule when overthrown on February 11.

What does Mitt truly believe about anything? Thanks goes to the Ron Paul camp for putting it together: