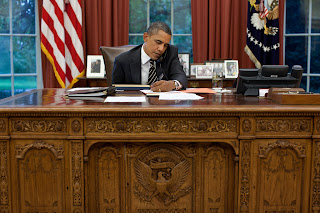 Media mania aside, fundamentals still favor Obama. But nothing matters unless we vote. For the next debate, I think we'd all like to see Obama lose his cool exterior and draw blood. Mitt has it coming. The GOP have it coming. They've been trying to bully their way into office for four years, doing zero to help the American people. It would be a shame to see them rewarded for that. Via ABC News:

3) Electoral map is shrinking, not expanding.

Despite earlier predictions by the Romney campaign that they would be competitive in traditionally blue states like Michigan, Minnesota and Pennsylvania, they are putting no serious effort into any of them. Moreover, the Paul Ryan pick gave Romney only a short-lived bounce in Wisconsin. The latest polls in the Badger State show Obama with a healthy advantage in the state.

This has left Romney has a very narrow path to 270, and no room for error. If Romney loses Ohio and Wisconsin, he would have no choice but to win almost every single other battleground state to win. ABC