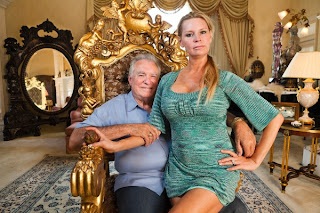 Update Oct. 11: In a new interview, the guy who caused his own financial problems thinks he knows what's good for the rest of us:


If only businessmen voted in the election, Romney would win 99 to 1. The United States is like a big company, and we need a CEO to run it. via Businessweek

The problem with these rich "businessmen"(a little sexist?) is that money means everything to them. And no. The US is not like a big company. These rich guys with their trophy wives can't seem to figure that out. Rich does not mean wise.


David and his young wife, or his old wife who's had a lot of work, posing in his estate 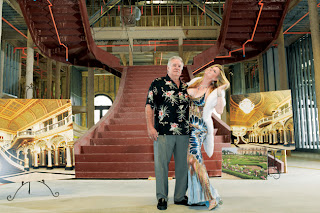 David Siegel, the owner of Westgate Resorts, sent a surprising email to his employees Monday. It said that if President Barack Obama wins re-election and raises Siegel's taxes, he will have to lay off workers and downsize his company — or even shut it down. "If any new taxes are levied on me, or my company, as our current President plans, I will have no choice but to reduce the size of this company," he wrote. "Rather than grow this company I will be forced to cut back. This means fewer jobs, less benefits and certainly less opportunity for everyone." In a version of Romney's "47 percent" remarks, Siegel added that "people like me who made all the right decisions and invested in themselves are being forced to bail out all the people who didn't. The people that overspent their paychecks suddenly feel entitled to the same luxuries that I earned and sacrificed 42 years of my life for."

David Siegel is the man who, together with his wife, Jackie, built the largest new house in America, known as "Versailles." His story first appeared in my book, "The High-Beta Rich." It then made it to the big screen with the documentary film "The Queen of Versailles." They became symbols of outsized spending, debt and real estate in America. Read the email he wrote to his workers at NBC

His home is 67 feet tall. Maybe instead of reducing his workforce, he could reduce the size of his house. 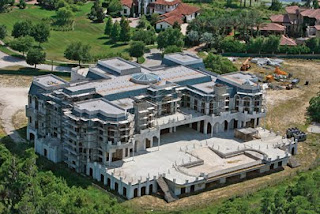