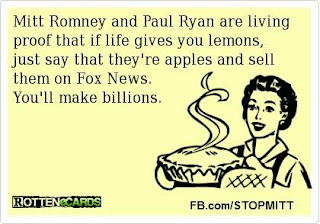 Mitt is still not offering many details when it comes to what he'd put in place after repealing Obamacare. Frankly, I don't think that's one of his concerns. The only reason he worked on Romneycare was to grease his way to the presidency with a legacy issue. Ironic that he hasn't been able to tout it.

Anyway, here's his latest interview — he says people don't die in their apartments. Apartments? Is that where we peons live? Tens of thousands of people die without healthcare insurance every year in houses, apartments on the streets... Mitt clearly has top of the line healthcare because he's clueless, as usual.


“We don’t have a setting across this country where if you don’t have insurance, we just say to you, ‘Tough luck, you’re going to die when you have your heart attack,’  ” he said as he offered more hints as to what he would put in place of “Obamacare,” which he has pledged to repeal.

“No, you go to the hospital, you get treated, you get care, and it’s paid for, either by charity, the government or by the hospital. We don’t have people that become ill, who die in their apartment because they don’t have insurance.” Columbia Dispatch