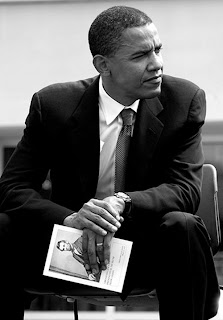 Those of us who have followed the Obama presidency and his campaigns know that this is no surprise, but it sure is depressing. Republicans have been overtly and covertly racist throughout Obama's presidency. It's been part of their strategy, a strategy that began from Obama's first day in office, to oust Obama from office. Republican leaders have manipulated their flock with various racial fear mongering tricks. Appealing to peoples' fear is a republican specialty.

But democrats and independents are also racist, according to the poll. They just don't express it like the republicans do. Obama has handled the discrimination with so much grace. I'm sure he knew it would be his burden to bear as the first black president. He's also been pre-occupied with the slew of problems he inherited. If Mitt wins, he'll have the advantage of being the white guy. From the poll:


Overall, the survey found that by virtue of racial prejudice, Obama could lose 5 percentage points off his share of the popular vote in his Nov. 6 contest against Republican challenger Mitt Romney. However, Obama also stands to benefit from a 3 percentage point gain due to pro-black sentiment, researchers said. Overall, that means an estimated net loss of 2 percentage points due to anti-black attitudes.