Abortion is Top Issue for Women in Swing States 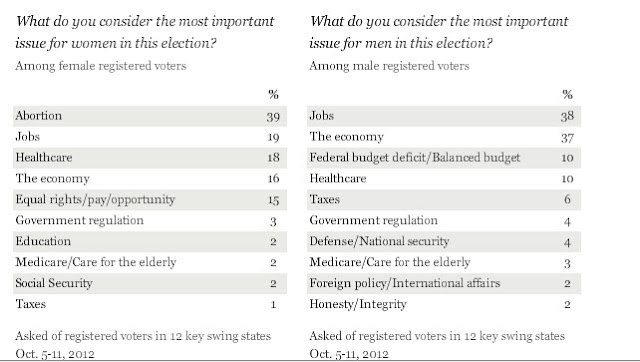 Reminders of the real Romney, an advocate for business, not people, but then again, Mitt sees corporations as people. Mitt's trying to say that corporations are made up of people. Yes, they are. But corporations are legal entities with special privileges. The main driver of corporations is profits. That's not so with people. Corporations can also run amuck and wreak havoc on communities and cities and states if they aren't regulated and held accountable.

Isn't this a form of coercion and intimidation? Is it even legal for employers to tell employees how to vote? Audio:


“I hope you make it very clear to your employees what you believe is in the best interest of your enterprise and therefore their job and their future in the upcoming elections,” Romney said.

Romney's not all that he cracks himself up to be:


For Mr. Romney, who started as a business consultant and then moved into the heady world of private equity, insists on portraying himself as a plucky small businessman.

Ahem. It’s true that when Bain Capital started, it had only a handful of employees. But it had $37 million in funds, raised from sources that included wealthy Europeans investing through Panamanian shell companies and Central American oligarchs living in Miami while death squads associated with their families ravaged their home nations. Hey, doesn’t every plucky little start-up have access to that kind of financing? NYT


Mitt changes his mind a lot on small issues and large issues.
Posted by Olga at 9:06 AM