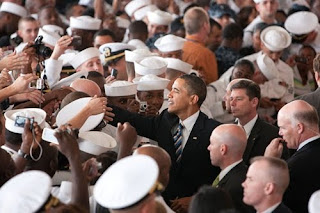 The Washington Post expects Obama to announce his decision around Nov. 20. I know he's intent on not rushing, but I'm thinking the announcement will come before that, despite Obama's travels to Asia starting Nov. 11:

President Obama has asked the Pentagon's top generals to provide him with more options for troop levels in Afghanistan, two U.S. officials said late Friday, with one adding that some of the alternatives would allow Obama to send fewer new troops than the roughly 40,000 requested by his top commander.

Obama met with the Joint Chiefs of Staff at the White House on Friday, holding a 90-minute discussion that centered on the strain on the force after eight years of war in two countries. The meeting -- the first of its kind with the chiefs of the Navy, Army, Marine Corps and Air Force, who were not part of the president's war council meetings on Afghanistan in recent weeks -- prompted Obama to request another such meeting before he announces a decision on sending additional troops, the officials said. WaPo

Obama is expected to receive several options from the Pentagon about troop levels next week, according to the two officials, who discussed the deliberations on the condition of anonymity because they are not authorized to speak publicly.

Before he can determine troop levels, his advisers have said, he must decide whether to embrace a strategy focused heavily on counterinsurgency, which would require additional forces to protect population centers, or one that makes counterterrorism the main focus of U.S. efforts in the country, which would rely on relatively fewer American troops.

One option under review involves a blend of the two approaches, featuring an emphasis on counterterrorism in the north and some parts of western Afghanistan as well as an expanded counterinsurgency effort in the south and east, one of the officials said. Obama has also asked for a province-by-province review of the country to determine which areas can by managed effectively by local leaders.

The president appears committed to adding at least 10,000 to 15,000 troops in Afghanistan in an effort to bolster the training of Afghan army and police officers in the country. Current plans call for the United States to double the size of the Afghan army and police forces to about 400,000 in the hope that they can take over security responsibilities. WaPo