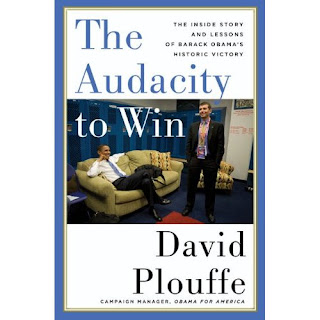 Update Nov. 1: Watch video of Plouffe on MTP here
Plouffe's new book. I'll always have fond memories of the 2008 campaign. It was my foray into politics, government and history. Plouffe hand-delivered a copy of his new book to Obama aboard Air Force One:

This Sunday on “Meet the Press,” David Gregory will interview Obama campaign David Plouffe regarding his new book, “The Audacity to Win: The Inside Story and Lessons of Barack Obama’s Historic Victory.” Time magazine has some excerpts from Plouffe’s book. On weighing Hillary as Obama’s VP: “Barack continued to be intrigued by Hillary. ‘I still think Hillary has a lot of what I am looking for in a VP,’ he said to us ‘... I think Bill may be too big a complication. If I picked her, my concern is that there would be more than two of us in the relationship.’ Neither Ax nor I were fans of the Hillary option.” And on Palin: “I also thought it was a downright bizarre, ill-considered and deeply puzzling choice ... [Obama] said, “... when voters step back and analyze how he made this decision, I think he’s going to be in big trouble. You just can’t wing something like this — it’s too important.” First Read