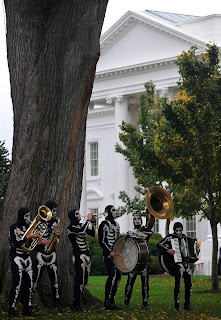 Trick or treating starts at 6:35 at the White House. The Obamas will hand out treats. See the Halloween treats and recipes here. 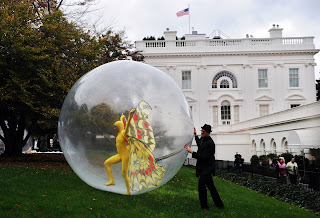 The loot is just part of the treat for the kids, ages 6 to 14. The White House said that set to roam the North Lawn were fairies, bubble makers, wandering trees, Star Wars characters, theater actors and artists and a "skeleton band."

The president and the first lady weren't planning to wear costumes. But don't rule out the chance that some youngsters might dress up as the Obamas.

The Obamas are not the first, though, to show Halloween spirit.

President George H.W. Bush and first lady Barbara Bush hosted 500 children on Halloween in 1989, loading them up with fun loot but also teaching them about the dangers of drugs. The kids came decked out in costumes; some Secret Service agents came dressed as clowns. 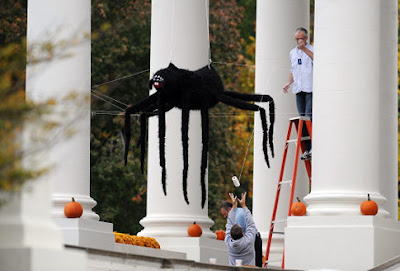 In the Clintons' first year in the White House, the Great Pumpkin returned. A huge orange jack-o'-lantern formed around the front entrance to the White House, with the front door to the mansion serving as the middle tooth. The first couple's daughter, Chelsea, was 13 at the time and the house was stuffed with pumpkins.

During the Nixon administration, first daughter Tricia hosted parties for underprivileged children, according to the White House Historical Association. And plenty of other first families got festive for Halloween. Read more at MSNBC 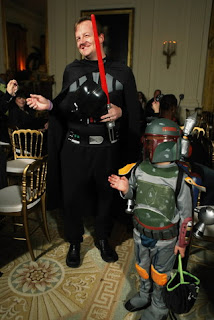 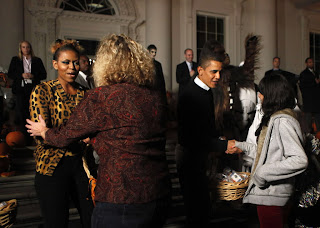 Updated Nov. 1: love the fairy dancer. Obama speaks to the military families and White House staff. Obama calls Michelle "a very nice looking cat woman." Obama: "Can people please not take a picture of my ambassador to the United Nations" (Susan Rice is dressed as Goofy).