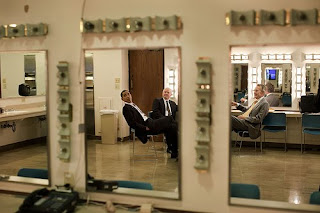 Update 10-27: Event over. See Obama's speech here.
Day 2 of Obama's visit to Florida: Tuesday, Oct. 27 at 12:10, Obama will visit the new DeSoto Next Generation Solar Energy Center. It's the largest solar plant in the U.S. so far.
He'll speak from the plant around 12:25 pm eastern. It will be live streamed at cnn.com or whitehouse.gov/live.
Obama is also scheduled to rally for Creigh Deeds in Virginia Oct. 27 at 5 pm eastern:

The president will tour Florida Power & Light's new solar energy plant in Arcadia, which is being celebrated as the largest solar photovoltaic plant in the country, big enough to serve 3,000 homes.

Gov. Charlie Crist, who has widely celebrated the plant, will not attend. His spokeswoman said Friday that he has to be in Tallahassee for the state Cabinet meeting.

But political calculations are at work, too. Crist is seeking the GOP nomination for the U.S. Senate, and standing with Obama could be a liability. He got savaged by conservatives for appearing with Obama in Fort Myers in February to support the economic stimulus plan and probably wants to avoid another round of publicity. Tampa Bay blog
A peek at the plant:

The president will offer details on funding for the "smart grid" during an appearance at a solar plant in Arcadia, Fla. White House officials said the projects would create tens of thousands of jobs in the near term and lay the groundwork for changing how Americans use and pay for energy.

The spending is aimed at improving the efficiency and reliability of the U.S. power supply, and helping to create markets for wind and solar power, officials said. They also said it would create "smart meters" to help consumers use electricity when demand is low and when rates are cheaper -- for example, by running dishwashers and other energy-thirsty appliances in the middle of the night.
LAT