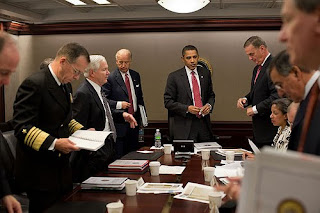 I used to think David Brooks was head and shoulders above other journalists in understanding Obama. But not according to today's column. He writes that he doesn't think Obama is determined enough to fight in Afghanistan:

The experts I spoke with describe a vacuum at the heart of the war effort — a determination vacuum. And if these experts do not know the state of President Obama’s resolve, neither do the Afghan villagers. They are now hedging their bets, refusing to inform on Taliban force movements because they are aware that these Taliban fighters would be their masters if the U.S. withdraws. Nor does President Hamid Karzai know. He’s cutting deals with the Afghan warlords he would need if NATO leaves his country.

Nor do the Pakistanis or the Iranians or the Russians know. They are maintaining ties with the Taliban elements that would represent their interests in the event of a U.S. withdrawal.

The determination vacuum affects the debate in this country, too. Every argument about troop levels is really a proxy argument for whether the U.S. should stay or go. The administration is so divided because the fundamental issue of commitment has not been settled.

Some of the experts asked what I thought of Obama’s commitment level. I had to confess I’m not sure either. NYT

That doesn't make any sense. If there is one thing that Obama is, it's determined. Set a goal, follow it through.

Whatever plan Obama comes up for the region is going to be highly detailed. It will likely have benchmarks and an end strategy. There will be macro and micro level detail. Whatever plan he comes up with, he'll announce it with folks standing behind him. Perhaps Colin Powell will be there. John Kerry will probably be there.

These meetings aren't just for hee haws. When these meetings conclude, Obama will have a buy-in because everyone has been involved. Everyone has offered up advice. Everyone played a part. To date, rethinking Afghanistan is the single most impressive--and courageous-- thing that Obama has done.

I don't know what Brooks is thinking -- that Obama is too analytical to be determined? Hmmm. Is "determined" a code word meaning Obama is reluctant to face a huge number of troop deaths? No one wants to say that out loud. But there's going to be a lot of blood shed. Obama takes human life seriously, unlike Cheney, for example, who's a robot of sorts.
Conservatives don't seem to be bothered as much by troop deaths. I guess that's the war monger in them. They believe war is noble.
I wish more than anything that we could pull out of Afghanistan.
Posted by Olga at 4:00 PM