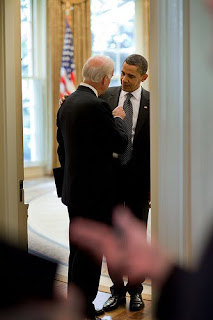 I'd argue that Dick is outdated as well, a man of yesterday, practically a neanderthal in his thinking.
After Dick went on and on recently about Obama being "afraid" (now just how ridiculous is that), Biden says Cheney's review of Afghanistan was inadequate, which is why Biden traveled there himself:

In an interview with reporters during his trip overseas, Biden called the Bush administration's Afghanistan review "irrelevant" and said Cheney was “absolutely wrong” to say the Obama administration is "dithering" on Afghanistan.

Initially dismissive of engaging Cheney's comments, Biden went on to dismiss the Bush-Cheney review as inadequate, according to a pool report.

“That’s why the president asked me to get in the plane in January and go to Afghanistan,” Biden said. “I came back with a different review.” Biden said the Bush-Cheney review is now dated. “A whole lot has changed in the last year," he said. "Let’s assume they left us a review that was absolutely correct. Is that review relevant and totally applicable to today in light of the changes that have taken place in the region, in Afghanistan itself? So I think that is sort of irrelevant. Not sort of – I think it’s irrelevant.” Politico