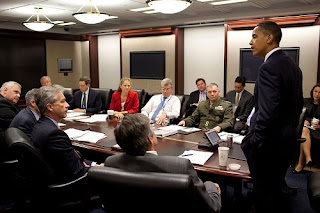 Since NATO is backing McChrystal, I suppose that means that the United States doesn't have to supply all of the troops. Perhaps part of Obama's overall strategy is to build an international consensus and get other nations to send troops as well. Who knows. Everyone is just guessing at this point and I'm sure the media and "experts" will continue to speculate until Obama announces the new strategy:

NATO defense ministers gave their broad endorsement Friday to the counterinsurgency strategy for Afghanistan laid out by Gen. Stanley A. McChrystal, increasing pressure on the Obama administration and on their own governments to commit more military and civilian resources for the mission to succeed.

General McChrystal, the senior American and allied commander in Afghanistan, landed here early Friday to brief NATO defense ministers on his strategic review of an 8-year-old war in which the American-led effort has lost momentum to a tenacious insurgency. The closed-door session — which had not been disclosed in advance — added a note of drama to the sort of NATO ministerial meeting that is often mundane.

“What we did today was to discuss General McChrystal’s overall assessment, his overall approach, and I have noted a broad support from all ministers of this overall counterinsurgency approach,” said NATO’s secretary general, Anders Fogh Rasmussen.
....
Kai Eide, the United Nations special representative for Afghanistan, flew to Slovakia to meet NATO defense chiefs, and he stressed that “additional international troops are required.” He also told the allies, “This cannot be a U.S.-only enterprise.”

Mr. Eide acknowledged that it may be difficult to rally public support for force contributions while allegations of election fraud continue to taint the government of Hamid Karzai, the Afghan president.
NYT