Obamas Open Up About Their Marriage in Sunday's NYT's Magazine 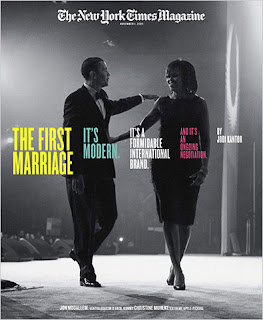 This Sunday's New York Time magazine features the Obamas' marriage. This story will be a reason to grab the NYT this weekend:

Another Washington dusk, another motorcade, another intimate evening played out in public view. On Oct. 3, just a day after their failed Olympics bid in Copenhagen, Barack and Michelle Obama slipped into a Georgetown restaurant for one of their now-familiar date nights: this time, to toast their 17th wedding anniversary. As with their previous outings, even the dark photographs taken by passers-by and posted on the Web looked glamorous: the president tieless, in a suit; the first lady in a backless sheath.

The Obama date-night tradition stretches back to the days when the president spent half his time in Springfield, Ill., reuniting at week’s close with his wife, who kept a regular Friday manicure and hair appointment for the occasion. But five days before he ventured out for his anniversary dinner, the president lamented what has happened to his nights out with his wife.