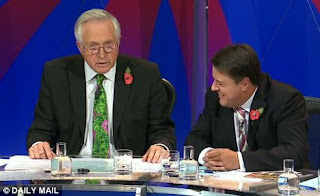 Imagine someone worse that Glenn Beck or Ann Coulter.

Rush Limbaugh really is a fuzzball next to Nick Griffin, who is overtly racist (believes in "purity" of the races) and anti-semitic. He especially hates Muslims. A lot of Brits were outraged when Griffin was invited on a TV show, Question Time. Griffin doesn't mess around with cute rhetoric.
Ann Coulter, for example, would like to say out loud that Islam is an evil religion, but peer pressure prevents her from saying that.

On his website, it says "white working class finds their champion."
He believes that ALL immigrants--not just undocumented ones--in Britain should leave. He's sort of like Mahmoud Ahmadinejad. Griffin is one of those who says the Holocaust is propaganda. In fact, most rightwingers are like Ahmadinejad--raging ideologues. Griffin pals around with David Duke, former head of the KKK.
He believes global warming is a scam:

“Man made global warming is an unproven theory. The science of climate change is in its infancy. The so-called consensus on the issue is the product not of debate but of the suppression of expert dissent.
“Before the political class and the green industrial complex dare to impose a single new tax, sub-standard lightbulb or useless windfarm on the ordinary taxpayer, they need to try to convince the public that global warming is man made, that returning the world to the warmer climate of medieval times would be a bad thing, and that there is anything that Europeans, as opposed to China and India, can do about it anyway.

He uses the same tactics as our rightwingers. He associates himself with ordinary people. It's the equivalent of when our rightwingers talk about "real America" and "true patriots."
One difference between Griffin and our rightwingers, he's not a war monger.

Charlatans like Griffin prey on people's weaknesses. Griffin blames immigrants for taking white people's jobs. This is the time of the charlatan because people are fearful right now. Change is happening--both good and bad--and it's happening at a faster pace. It seems we are truly at a pivotal moment in history where change and progress are bumping up against those who would prefer times of yesteryear. Pat Buchanan, who wrote a few days ago about his fears for "white America," sums up people who are out of touch with reality:

Moreover, the alienation and radicalization of white America began long before Obama arrived. He acknowledged as much when he explained Middle Pennsylvanians to puzzled progressives in that closed-door meeting in San Francisco.

Referring to the white working-class voters in the industrial towns decimated by job losses, Obama said: "They get bitter, they cling to guns or religion or antipathy to people who aren't like them or anti-immigrant sentiment or anti-trade sentiment as a way to explain their frustrations."

He concludes by suggesting that he and his kind are America and that they are losing something:

America was once their country. They sense they are losing it. And they are right.