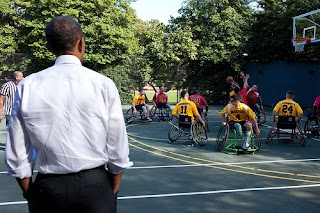 Updated with video
Obama will speak on clean energy at 12:30 pm eastern and then he's off to the races. At 2:45 pm eastern, he'll speak on behalf of Deval Patrick and at 6:45 pm he'll speak at a fundraising dinner for Chris Dodd. I'll post video when it's up. The events should be live streamed at cnn.com and whitehouse.gov. Also, you may want to check out whitehouse.gov at 12 pm eastern, when Michelle Obama speaks on breast cancer awareness.

President Barack Obama is doing more than promoting clean energy with a tour of the Massachusetts Institute of Technology. He's pumping some energy of his own into the campaigns of New England allies facing tough re-election bids.

The president's politicking on Friday begins in Cambridge, Mass., with a quick "official" event at MIT to challenge the nation to lead the global economy in clean energy. That appearance significantly brings down the cost of flying the president to fundraisers designed to raise money for two politically anemic Democrats, Massachusetts Gov. Deval Patrick and Sen. Chris Dodd of Connecticut.
Patrick, an Obama friend who faces re-election in 2010, has insisted for months he's not focused on re-election next year, but drops the pretense with two high-profile fundraisers. AP