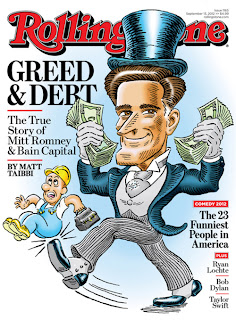 We are all invested in China, especially when we buy cheap goods at places like Wal-Mart. Our demand for lower prices helped China become a manufacturing hub. China owns a lot of our debt as well. Still, Romney has or had significant investments in China, even in China government-owned businesses. It's not his investments in China that are so bad, it's the hypocrisy, saying that he's going to crack down on China....
From the Washington Post:


Still, Romney’s investments are strikingly more international than President Obama’s, based on financial disclosures from both candidates.

Romney’s tax returns released this month show that the candidate’s individual trust last year sold off thousands of shares in seven Chinese corporations, including some state-owned firms, for a profit of more than $8,600.

The Chinese firms are among more than 1,000 companies Romney’s blind trust and his family’s trust invested in and later sold in 2011, according to the tax returns. The companies span the globe, ranging from the French aircraft manufacture Dassault Aviation to Canadian yoga clothing retailer Lululemon. WaPo

Based on a public financial disclosure report, the president holds $1 million to $5 million in U.S. Treasury notes, which are sold with terms of two, three, five, seven and 10 years. He also holds $600,000 to $1.25 million in Treasury bills, which have terms of one year or less.