Update: The guy who created the alternative reality for republicans, as seen in the chart below, is expanding his polling venture.

All of the polls keep showing Obama with a lead that's widening. But in typical republican style (they get their news from Fox News, after all) they've created new polling system where Romney is winning by up to 11 points! 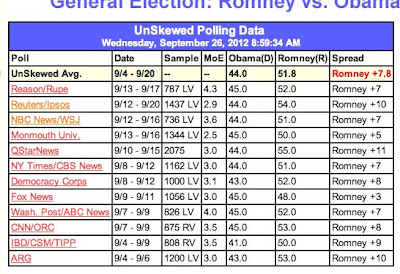 Even Gallup has Obama up by three. It's been dead even for months. More important is the state polling. Florida is a must win for Mitt. Three new polls released just today:


President Obama now holds his largest leads to date in Florida, Ohio and Pennsylvania, according to three new CBS News/New York Times/Quinnipiac University polls released early Wednesday. The polls all show Obama easily clearing the critical 50-percent threshold in each state, largely as a result of his commanding advantage among female voters. Obama leads Republican nominee Mitt Romney by 9 points in Florida, 10 points in Ohio and 12 points in Pennsylvania. The three states together combine to award 67 electoral votes, and no candidate has won the presidency without claiming at least two of them since 1960. National Journal

Perhaps Romney and the GOP should consider that we, the people, don't wish to be treated so offensively by people who want to lead us (especially when there's this). Every time I see this video I want to stomp on his feet and pull his hair:

Same for this one. I'm sure Mitt has been wonderful to his family and his grandkids, a real provider. Money matters a lot to Mitt. The private Mitt seems like a decent guy. There's something wrong with the public Mitt. There's something wrong with his motivations. He's not fighting for the right reasons or the right people. That probably has a lot to do with his position of privilege:

Romney discusses buying a factory in China while at Bain