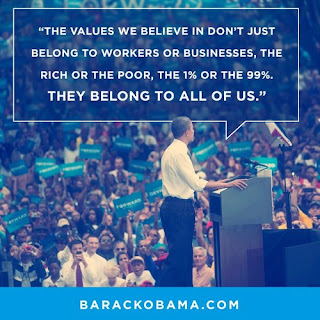 President Barack Obama's job approval rating has been 50% or higher in each of the last four Gallup Daily tracking figures, including a 51% rating in the latest three-day rolling average, from Sept. 23-25. This nearly matches the level of approval for Obama that Gallup found at the end of the Democratic National Convention earlier this month. His approval then dipped into the 40s by mid-month before rebounding to 51% late last week. Gallup

Polls say people trust Obama waaaaay more on Medicare than they do Romney/Ryan.

Obama's now leading in New Hampshire and has a small edge in North Carolina and Nevada. If Obama wins Ohio, which is leaning Obama, then Mitt NEEDS all of these: Nevada, Colorado, Iowa, Florida, North Carolina, and Virginia. If you look at the electoral map, Obama has an edge in all of them except for NC.

I really enjoy the Obama camp ads. I love all the different faces in the Obama crowd.