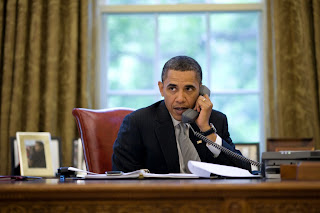 The President reiterated the Administration’s sense of urgency for dealing with the oil spill, assured the governors that the federal government is bringing the best science and expertise to the table and underscored his commitment to continuing our strong collaboration with the state and local governments. Department of Homeland Security Secretary Napolitano, Rear Admiral Neffinger, EPA Administrator Jackson and Commerce Department Principal Deputy Under Secretary for Oceans and Atmosphere Monica Medina provided the regular daily briefing on operations, leak stabilization, environmental impact and oil trajectories.

For all the local coverage of the oil spill, visit NOLA. Here's a transcript of the press briefing with Thad Allen and Carol Browner, assistant to POTUS on energy and climate change.

MR. GIBBS: Good afternoon. As we get started today we're going to hear from a couple of different people that are working on the administration’s response to the oil spill in the Gulf. First you’ll hear from Admiral Allen, and then we'll be happy to take your questions.

I will say as a point of introduction, though he rarely needs an introduction, he would normally be in Louisiana were it not for today. His vice commandant is retiring. Tomorrow he is leaving the command of the Coast Guard. But the President and the Secretary of Homeland Security have asked him to delay his retirement and continue to serve as the National Incident Commander for the spill in the Gulf.

So let me turn this over to Admiral Allen.

ADMIRAL ALLEN: Thank you very much. Thanks for the opportunity to talk with you here today. I thought I might start out by giving you a little background on the command-and-control system and how oil spills work. But first let me premise -- I would underscore what he said -- I’d much rather be down in Louisiana, the Gulf Coast, dealing with this problem down there because I know it’s of concern to everybody. And as somebody who has worked on the water all his life, nothing is more disturbing than oil on any water in our country.

The current paradigm for responding to oil spills really dates back to the legislation that was passed after the Exxon Valdez, the Oil Pollution Act of 1990. It mandated a paradigm by which the responsible party or the spiller would be held accountable. It also created a oil spill liability trust fund to fund responses where there was no responsible party, or to fund operations and have those funds recouped from the responsible party.

It’s premised on the country being divided up into areas for the purpose of developing contingency plans. And we have these areas called captain of the port zones; those are the Coast Guard commanders that are responsible for that area. They get together with the state and local stakeholders and they develop plans to protect the most sensitive areas within those areas, and they’re called area contingency plans. There is one for every single part of the coastline of the United States. There is one that covers the Gulf Coast as well.

This entire framework is called the national contingency plan, and it is how we have prosecuted oil spills ever since the Oil Pollution Act of 1990. That is the way we have been prosecuting this case since the explosion on the Deepwater Horizon on the 20th of April. Even in advance of the sinking of the drilling unit, we were staging equipment that was against the scenario we would have a worst-case spill. And we started actually mobilizing equipment, salvage engineers and everything right after the event happened into the 21st of April.

So the command-and-control structure down there right now is the commanding officer of the Coast Guard in New Orleans is the federal on-scene coordinator for the response. We have elevated that responsibility to Mary Landry. She is in Robert, Louisiana, and she is called an area unified commander. That’s when you take one or more of these zones or these areas and you combine them under a larger command.

So we have a single command in the Gulf. The commander is Rear Admiral Mary Landry. She is supervising subsections. One is New Orleans. The other one is over in Mobile, and Mobile covers Mississippi, Alabama, and the western portion of Florida. There is another command at St. Petersburg, and another one in Key West and around up the East Coast. At this point, they all, for the purpose of this response, report to the area command in Robert, Louisiana.

At a higher level we have what we call a regional response team. Those are all the federal players that have responsibilities for an oil spill response. It would be Department of Interior, EPA, Coast Guard, NOAA. And they look at resource requirements across a regional area. Let’s say if you had a decision of where to put boom between Mississippi, Alabama, or Louisiana, they would coordinate with the regional response team.

There is also the allowance in the national contingency plan that if the resource adjudication process or the coordination becomes complicated -- and it’s complicated in this place -- in this case -- that the President has the option of declaring something called a spill of national significance. Again, this is contained in the national contingency plan, and also have the option to designate a national incident commander, which the President and Secretary Napolitano have designated me.

Now, this is not a policy. This is a command-and-control structure. It’s actually contained in the code of federal regulations that implement the Oil Pollution Act of 1990. So when you hear us talk about responsible party, or the
federal on-scene coordinator, we’re actually talking about legal definitions that are derived from statute -- the Oil Pollution Act of 1990 -- that are contained in 40 CFR 300.

So there are actual clear definitions, and I think sometimes we’re losing the distinction of what a responsible party or federal on-scene coordinator are. And we’d be glad to go through and answer questions related to the spill response, especially as it relates to BP’s role as a responsible party and the roles of the federal on-scene coordinator.

Q Thank you. Thanks for being here, Admiral. Let me start on that point about who’s in charge and the quality of the response so far. Secretary Salazar said yesterday, referring to BP, “If we find that they’re not doing what they’re supposed to be doing, we’ll push them out of the way appropriately.” What does that mean, “push them out of the way”? What more could be done?

ADMIRAL ALLEN: Well, I would say that's more of a metaphor. What we need to make sure is they execute their responsibilities, the responsible party, and we carry out our responsibilities and be accountable as the federal on-scene coordinators. This is what we do, is if something is going -- if BP is applying resources, there is an operation being conducted, and we want it to be done some other way, they’re issued an order by the federal on-scene coordinator, and they comply. And there have been adjustments made all the way along. And if I need to, I call Tony Hayward myself. They’re the responsible party, but we have the authority to direct.

This segment is informative:

Q Is there -- to this point, though, whether the government can do more, can it push BP out of the way if it feels like that company is not doing the job? What is your response to that?

ADMIRAL ALLEN: Well, to push BP out of the way would raise the question to replace them with what?

Q Do you think that this government right now is doing the best it can?

ADMIRAL ALLEN: I’ve been involved with the technical decisions made, especially in relation to deal with the leak, and they are pressing ahead. We are overseeing them. They're exhausting every technical means possible to deal with that leak.

Q Is there a solution?

ADMIRAL ALLEN: There are a number of solutions and they're doing them in sequence based on risk. The ultimate solution is going to be to drill a relief well, take the pressure off that well and cap it. That will be sometime in August. We don't want to wait that long. So we’re trying a series of interventions, starting with the insertion tube to evacuate the oil that we can, the top kill shot that will be scheduled for I believe early Wednesday now to try and force mud down the blowout preventer into the well to stop the pressure so it can be sealed.

There’s a series of events. They're trying the least risky ones first and moving on down. But we cannot stop. We’ve got to try every means at our -- every means that we can to stop this leak.

Obama will speak with the press on Thursday:

MR. GIBBS: Let me just add from the President’s perspective for this, Scott. As you heard the Admiral say, the President’s viewpoint is failsafe has to mean that. And if it doesn’t, then we have to examine why it doesn’t and the circumstances around that and have that impact our decisions going forward.

In terms of the reviews that the government is looking through to look back at what got us to this point, we have the President’s instruction for Secretary Salazar and the Department of Interior to report back to him. That will be Thursday. Thursday, the President will receive that report here at the White House.

There is a separate national engineering report on this incident. And as you know, the President set up an independent commission headed by a former EPA commissioner and a former U.S. senator from Florida that will be charged with looked at both the role of industry and the role of government in regulating industry. And the President I think has been very clear that we should not spare any expense in looking at both of those aspects of what may or may not have caused this.

Q I’m sorry, a question for you and also the Admiral. The President is receiving this report Thursday. Should we expect the President to respond to it immediately in some fashion?

MR. GIBBS: I expect that the President will speak to you all about it and answer some questions about it, yes.