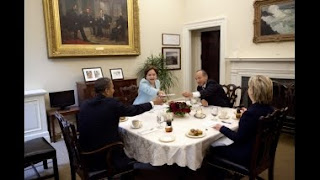 This ought to go over well with the gun huggers.
President of Mexico Felipe Calderon spoke to Congress today. He doesn't mince words.
He said when the U.S. ban on assault weapons expired in 2004, Mexico saw an increase in gun trafficking and crime.
Calderon says he admires the Second Amendment but many U.S. guns are ending up in the hand of criminals in Mexico, which traces 80% of assault weapons back to the U.S.
He says one of Mexico's biggest challenges is the U.S.'s demand for drugs.
Calderon also said the country is remaking its judicial system based on the U.S. system.
Mexico is working on creating more opportunities for its people and is aiming for universal health coverage by 2012. The idea is to give people fewer reasons to leave Mexico, he said.
Calderon also spoke of Arizona's new immigration law.
"For us, migration is not just your problem," he said. Mexico loses its best workers and most dynamic people when they leave for the U.S., he said. "My government does not favor the breaking of the rules," he said.