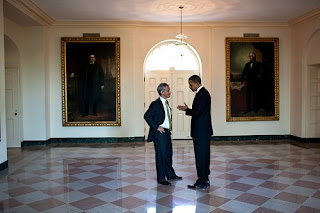 Obama and Rahm
Update May 31 via Politico:

Israeli Prime Minister Benjamin Netanyahu has canceled his visit to the White House in the aftermath of the Israeli military's action against a flotilla seeking access to Gaza, the AP reports. White House spokesman Bill Burton said in advance of Netanyahu's decision that the White House was currently "to understand the circumstances surrounding this tragedy."

The Obama administration is trying to get peace talks back on track. Rahm Emanuel is in Israel, part of a family vacation, and will be meeting with Netanyahu today. Obama met with Netanyahu at the White House on March 24, and apparently, it didn't go so well.

Israeli Prime Minister Benjamin Netanyahu is scheduled to meet President Barack Obama in Washington Tuesday (June 1),[1] with talks likely to center on the current round of indirect negotiations between Israel and the Palestinians mediated by U.S. Special Envoy to the Middle East George Mitchell. [2]

White House Chief of Staff Rahm Emanuel was expected to meet today (Wednesday) with Netanyahu to deliver the invitation. Emanuel is currently on a private visit to Israel to celebrate the bar mitzvahs of his son and his nephew. Emanuel also is expected to meet tomorrow (Thursday) with Israeli President Shimon Peres to discuss a range of U.S.-Israel concerns.[3][4] The Israel Project