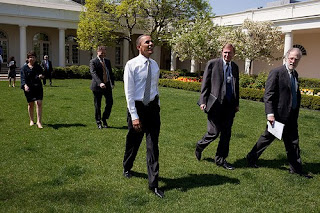 Updated May 25 with Obama's sked:
At 12:35 pm eastern, Obama will tour Solyndra.
At 1:20 pm, Obama will speak about the new energy economy. Live audio stream at WhiteHouse.gov. There could be a live video stream at cbsnews.com or msnbc.com.
At 2:15 Obama will head back to the WH.
*Keep in mind west coasters, these times are eastern.
Update: Obama will visit San Francisco May 25
On May 26, Obama will speak at Solyndra in Fremont. I'll post details on time when they're available, which is typically the day before the event. Get WH background on Solyndra and Fremont here.

In a boost to the Bay Area's status as a hub of the cleantech industry, President Barack Obama will tour Fremont solar panel manufacturer Solyndra during a 19-hour swoop through the region next week.
Solyndra received a $535 million federal loan guarantee last year to build a new solar panel manufacturing plant that now employs 1,000 workers, according to the White House. The Obama administration has touted the project as a major success story of the economic stimulus bill, which provided the funding. A second phase is expected to employ an additional 1,000 people, Solyndra officials have said.
Before his Wednesday morning visit to Solyndra, Obama will attend a pair of Democratic fundraisers Tuesday evening in San Francisco — one for Sen. Barbara Boxer, who is seeking a fourth term in November, and another for the Democratic Senatorial Campaign Committee. Mercury

CEA estimates that 340,000 jobs were created or saved by the Recovery Act in California through March. 2010. TOTAL SPEND – More than $40 billion in Recovery funds has been made available to California– and more than $27.1 billion has already been spent. WH

What Solyndra is doing with stimulus money:
Posted by Olga at 8:24 AM