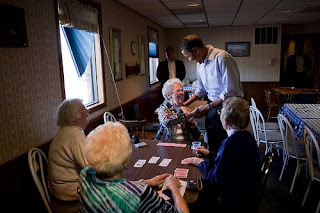 The financial crisis of 2008 made it inevitable that unemployment would rise sharply through 2009. It also caused the budget deficit to skyrocket: Most voters, of course, don't follow these issues closely enough to gain a detailed understanding of cause and effect. They just tend to notice that unemployment and the budget deficit have risen while President Obama has held office.

Republicans have worked assiduously to blame these conditions on Obama's policies even though they were obviously caused by conditions he inherited. At the same time, they have worked relentlessly to create a social stigma around his efforts to push back. The result of this campaign can be seen in things like Politico's weekend article chastising Obama for blaming his predecessor: Read the rest at TNR

Obama can "blame" Bush, if that's what he's doing, so long as the republicans keep saying that the Obama administration is causing unemployment. Republicans know better. But they also know that most people don't know anything about recession cycles or economics.
The awful irony is that it really is like Obama says: republicans drove the car into the ditch and now they want the keys back.
Posted by Olga at 6:36 PM