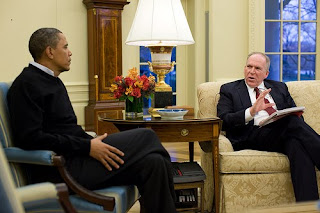 Obama and Brennan
Obama releases his national security strategy tomorrow, so hold on tight for republican and right wing blather. Obama's strategy advocates cooperation with other nations. His strategy doesn't consider "terrorism" the enemy, but rather al qaeda. Terrorism is a tactic. That's an important distinction that's completely lost on war mongers. Obama's strategy doesn't condemn Islam, but rather al qaeda. Obama's vision of national security brings me great comfort. If there was one reason I'd vote again for Obama, it would be for that reason alone. Hillary and James Jones will speak tomorrow on the new strategy. Here is an excerpt of today's speech by John Brennan, President for Homeland Security and Counterterrorism.

Tomorrow, Secretary of State Clinton and the President’s National Security Advisor, General Jones, will discuss how this strategy will advance our interests around the world.

Today, as the President’s principal advisor on homeland security and counterterrorism, I want to address how this national security strategy is guiding our efforts to secure our homeland by renewing America’s strength, resilience and values.

The President’s strategy is absolutely clear about the threat we face. Our enemy is not “terrorism” because terrorism is but a tactic. Our enemy is not “terror” because terror is a state of mind and as Americans we refuse to live in fear. Nor do we describe our enemy as “jihadists” or “Islamists” because jihad is a holy struggle, a legitimate tenant of Islam, meaning to purify oneself or one’s community, and there is nothing holy or legitimate or Islamic about murdering innocent men, women and children.

Indeed, characterizing our adversaries this way would actually be counterproductive. It would play into the false perception that they are religious leaders defending a holy cause, when in fact they are nothing more than murderers, including the murder of thousands upon thousands of Muslims. This is why Muslim leaders around the world have spoken out—forcefully, and often at great risk to their own lives—to reject al Qaeda and violent extremism. And frankly, their condemnations often do not get the recognition they deserve, including from the media.

Moreover, describing our enemy in religious terms would lend credence to the lie—propagated by al Qaeda and its affiliates to justify terrorism—that the United States is somehow at war against Islam. The reality, of course, is that we never have been and will never be at war with Islam. After all, Islam, like so many faiths, is part of America. Read the whole transcript

The strategy will also address the growing numbers of homegrown terrorists:

Indeed, we have seen an increasing number of individuals here in the United States become captivated by extremist ideologies or causes. Somali Americans from Minnesota traveling to fight in Somalia, the five Virginia men who went to Pakistan seeking terrorist training, David Headley, the Chicago man charged with helping to plan the Mumbai attacks, the Pennsylvania woman, Jihad Jane, charged with conspiring to murder a Danish cartoonist. The president’s national security strategy explicitly recognizes the threat to the United States posed by individuals radicalized here at home.

We have seen individuals, including U.S. citizens, armed with their U.S. passports, travel easily to extremist safe havens and return to America, their deadly plans disrupted by coordinated intelligence and law enforcement. Daniel Patrick Boyd of North Carolina, who with others, conspired to murder U.S. military personnel and Najibullah Zazi, who received his instruction in bomb making in Pakistan. Unfortunately, we were unable to thwart Faisal Shahzad, accused of attempting to set off the car bomb in Times Square.