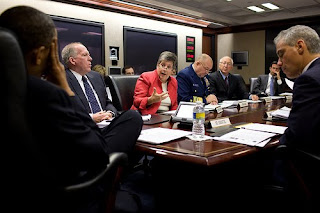 Update May 27: See the video of Obama's remarks here.
Obama will hold a news conference with the press tomorrow. The conference starts at 12:45 pm eastern time. You should be able to catch a live stream everywhere, msnbc.com, cbsnews.com and WhiteHouse.gov. It will be on regular TV as well.
Should be a good one since White House reporters have been complaining about the lack of one on one time with Obama. The so-called "liberal media" has clearly concluded that the government's response to the oil catastrophe has not been good enough. I expect that will be the main line of questioning. The Washington Post actually has five very good questions for Obama. What is clear is that the agency that oversees oil companies is corrupt.
The federal government could probably use an overhaul of all of its agencies because it's just a matter of time before the next one is exposed. It seems that government has been letting business slide for too long.
Thursday, May 28, the Obama family will head to Chicago for Memorial Day weekend.
On Friday, May 29, Obama heads to the gulf.
On Memorial Day, Obama will attend ceremonies at Lincoln National Cemetery.
June 1, Obama hosts Benjamin Netanyahu.
June 2, the White House holds a concert honoring Paul McCartney.
Posted by Olga at 12:34 PM