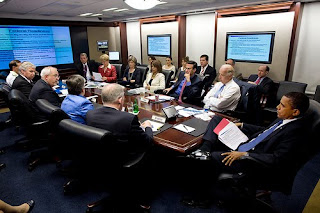 Obama briefed on hurricanes
Obama will soon have one more problem to contend with: Hurricanes. Obama needs to start walking on water--NOW.
Economy, terrorists, North Korea, Iran, Iraq, Afghanistan, floods, tornadoes, oil spills. Did I miss anything? What a mess. I'm sorry, but I truly think people are wrong in about the Obama administration's response to the oil disaster. There is no doubt that oil companies have corrupted government. But that didn't just happen during the Obama administration. That's been a long time coming. The big lesson here is business without proper oversight will succumb to greed every time. Every government agency could probably use an overhaul, because the next disaster is looming.
I've just about had it with the republicans. Exactly what will it take for them to actually do something?
I hear people saying why didn't BP try "top kill" sooner? It's because BP has been engineering top kill since the beginning of the disaster and it took that long to get it right. It's a horrible thing that happened. People are angry. But they don't have the facts.
The Obama administration is getting slammed by the media. Once the media buys into a narrative, they all follow each other, and then they're all over a story until it makes you nuts. Their coverage only encourages people to be defensive. MSNBC's biggest hack has a story about Obama being too cool. I will never understand that criticism.
The media holds up James Carville as an example that even democrats are angry. Carville isn't a democrat. He's a Clinton democrat. I've rarely ever heard him have a good word to say about Obama. He's a political machine. He's also really annoying. For me, he's up there with Sarah Palin, Dylan Ratigan and Keith Olbermann. Ick.

Statement by the Press Secretary on the President's Hurricane Preparedness Briefing

Under the President’s direction, the entire Federal family is working together to ensure not only that the Federal government is doing everything to prepare for the coming season, but that the public knows of the critical role they have in making sure they are prepared for storms and other emergencies, to include having up-to-date evacuation plans.

The President stressed that the government must ensure we consider the effects the BP oil spill could have on storms, response capabilities, and recovery efforts in planning for this year’s season but that those considerations do not change the primary mission of emergency management officials during a response, which is to support state efforts to protect lives and property.

In addition, the President urged that Secretary Napolitano and Administrator Fugate continue to be in close contact with Governors, congressional delegations, and emergency managers in hurricane-prone states to ensure they have all the tools and resources needed to prepare for, respond to, and recover from any potential hurricanes.”