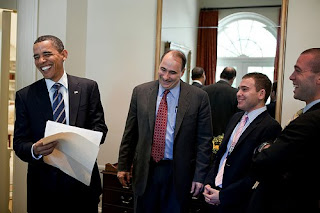 Update May 25: Obama will leave Friday for the Gulf:

On Friday morning, May 28, President Barack Obama will travel from Chicago to the Louisiana Gulf Coast to assess the latest efforts to counter the BP Deepwater Horizon oil spill. The administration has mobilized one of the largest responses to a catastrophic event in history, with more than 1,200 vessels in the region and more than 22,000 people, including many of the brightest scientific minds from both the public and private sector, working around the clock to mitigate the oil’s impact.

Update: There's sweeping judgement going around, by people with nothing better to do than criticize the president, that Obama should be at Arlington National Cemetery on Memorial Day, not Biden. Well, folks, Ronald Reagan had a deputy defense secretary lay the wreath at Arlington. And it's not like he's blowing off the whole day. He's going to the Lincoln National Cemetery.
There is such nonsense out there, such ignorance, that it's a wonder our society functions at all.
And perhaps, Obama would like to spend some quality time with his children and friends in Chicago for two days. It's well deserved.
Obama will speak at 12:45 pm eastern. From the White House:

On Thursday, May 27, President Barack Obama and his family will travel to Chicago, where they will spend the weekend. On Monday, the President will participate in a Memorial Day ceremony at Abraham Lincoln National Cemetery in Elwood, Illinois.

Obama first spoke at the Lincoln National Cemetery in 2005. Read that speech here. An excerpt:

What led these men and women to wear their country's uniform?

What is it that leads anyone to put aside their own pursuit of happiness; to subordinate their own sense of survival, for something larger - something greater?

Behind each stone is one of these stories; a personal journey that eventually led to the decision to fight for one's country and defend the freedoms we enjoy. Most of the Americans who rest here were like my grandfather, a WWII vet who volunteered after Pearl Harbor, fought in Patton's Army, but was lucky enough to came back in one piece, and went on to live well into his twilight years.

My grandfather never boasted about it. He treated the fact that he served in the military like it was only a matter of fact.