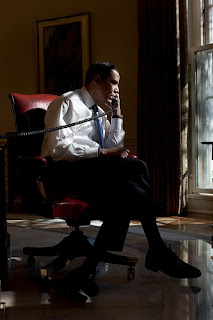 I have come to believe that politics is no way to solve people's problems and that there is too much opposition to government in America for it to be effective. I could change my mind next week. I'm really in a bad mood this week on the political front.
In a way, I'm hoping Obama is a one-term president, not because I dislike what he's doing. I support most of what he's doing. He's the best president in my life time. I just see a changing tide. I see bigger problems in this nation than politics. The revolt against government is another symptom of the Me, Me, Me-first, Survival of the Fittest society. The nation has lost its moral compass.
Obama's interview with Diane Sawyer:

"I'd rather be a really good one-term president than a mediocre two-term president," he told ABC's "World News" anchor Diane Sawyer in an exclusive interview today.

Obama sat down with Sawyer two days before he will deliver a State of the Union speech to a joint session of Congress, and he acknowledged the political setbacks of his first year in office. More at ABC News

The interview will be milked:

Here's a transcript Watch a preview here. Obama says he's rooting for the Saints in the Super Bowl and he talks about basketball with his daughter.
Update: Watch the video from Nightline here.