Hopes for State of the Union Jan. 27 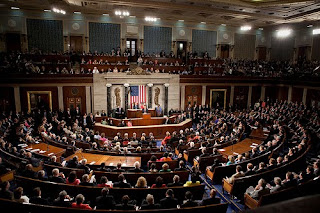 Obama speaks to Congress on healthcare
I only have one hope for Obama's state of the union speech and that is that he calls for bipartisanship, and he holds all of Congress responsible for bipartisanship, and that he makes it happen. Obama has to insist on it. Our leaders need to start behaving like mature adults. I'm so sick of politics. I want to see both sides sitting down solving problems, no excuses. The republicans have been despicable. Their sole focus has been to oppose Obama at every turn. They've been acting like political animals clawing their way back to power. They've allowed the way out there conservatives, such as Michele Bachmann, to take over. The democrats haven't been solving problems either. They've been too busy figuring who's on top -- liberals or blue dogs. They're all out for themselves and no one is representing the people. Matthew Dowd, on This Week, says independents are on the rise and independents want bipartisanship. That's about right.

MORAN: Well, the Republicans seem to think it -- many -- that it was a Republican victory, just as the Democrats did in 2008. Take a look at a chart that -- that refutes that a little bit. This is a chart that shows how people identify themselves. Are they liberal, moderate, or conservative? Over the course of the last five years, there's basically been no change -- that's the message, that this country didn't swing to the left in 2008 and it's not swinging to the right now.

DOWD: Well, the fastest rising -- the fasting rising group of voters in this country right now are independents. It's not as if the Democrats suffered and Republicans rose. Independents have risen.

Dowd's got it right on what the majority of Americans hope for:

MORAN: But, seriously, what should Barack Obama do when he gets before the Congress and the country on Wednesday night?

People want to be understood in their anxieties, but they also want a sense of hopeful and optimistic. And I also think, instead of going up there and pointing his finger at Republicans...

ROBERTS: Right, he needs to...

DOWD: ... he's going to have to say, "I embrace this. We went off a bit over the course of the last year, but I want to bring a bipartisan solution to the problems of America." Read the whole transcript.