How Coakley Saved Obama and the Democrats 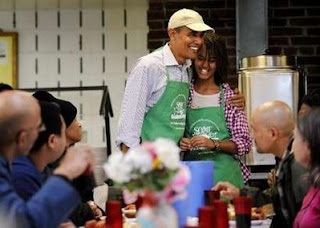 I don't agree with the Root's entire analysis below but I do think, in a way, Martha Coakley's loss has allowed Obama and the democrats to take a deep breath and get a grip.
While those on the left think Obama should move to the left--talk about out of touch --that's the last thing Obama needs to do, I'm hoping that the Obama administration and democrats learn to communicate better with blue collar America. We can't go around saying that people are uniformed and they don't get it. We can't blame the fact that important legislation doesn't pass on an uniformed electorate.
We have to accept it. We have to find a way to speak to the Snookis, the people vulnerable to misinformation (seniors) and the people who don't follow politics on a regular basis. I don't mean speaking down to people but putting things in their terms. I remember a time when I didn't know the difference between a democrat and a republican (many would argue that there isn't a difference anymore).
Even though I read up on healthcare more than the average person, it wasn't easy to understand. I still don't completely understand all of it.
Somehow, democrats have to find a way to keep is simple.
I think we also made the mistake of thinking that the tea party fringe, the loser-hater types, were representative of the angry independents. We discounted that anger as bigotry based on the babbling of Michele Bachmann, Limbaugh and Beck, when there really was a legitimate backlash against politicians and power. People are fearful about being taxed to death and having the government take over their lives.
Fortunately, we have a president who does learn new things and adjusts accordingly.

Massachusetts to Obama: Time’s up, bro.

If this wake-up call doesn’t do it for Democrats, nothing will. After doing what seemed impossible a mere two years ago—electing a black guy president of the United States—they unlearned three crucial lessons they should have learned by heart a long time ago:

This is still America...

In this country, good looking people win elections, voters are impatient, and as John Travolta noted poignantly in Pulp Fiction, you “don’t f*** with another man’s vehicle.”

Yet stumping on the Sunday before Election Day, Obama tried to breathe life into Coakley by jabbing at the very emblem that helped Brown connect with voters—his pick-up truck—saying, "Forget the truck. Anybody can buy a truck." Why?

Until Northern, urban Democrats come to terms with the power of this crossover appeal, they’re going to keep losing elections. You don’t mock the truck—you go get your own. Read it all at The Root

Hey, even Mike Huckabee is thinking along the same lines: