Obama's Not Fond of Shine Police and Hates to be Late 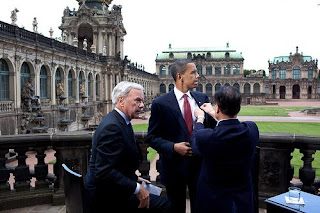 Obama also confessed recently that one of his biggest pet peeves is what he calls “the shine police” — aides and makeup artists who powder his face before he does television. “You notice that even before this interview, they constantly want to powder my nose and forehead and it's never enough — that I find quite irritating,” Obama told The Associated Press.

Even more than he dislikes drama, though, Obama “hates being late,” one senior aide said. (Lately, more times than not, he arrives ahead of schedule.) “His biggest thing is he hates inconveniencing people,” the aide said. “He wants meetings to start on time and wants to have enough time to meet with people, and so we try to build in some extra time. He hates being rushed, and he hates shortchanging someone. He’s always very conscious about running on time. That’s a big deal to him. ”

There are, however, plenty of times when he takes seemingly annoying things in stride. When a cell phone went off with a duck quack during an East Room event, Obama stopped mid-speech, smiled and asked, “Whose duck back there?”

“It’s a duck,” said Michelle Obama, standing by his side and laughing.

“There’s a duck quacking in there somewhere,” Obama said. “Where do you guys get these ringtones by the way, I’m just curious.”

Moments later, he returned to his speech, seemingly not at all irritated. Read more of Obama's pet peeves at Politico.