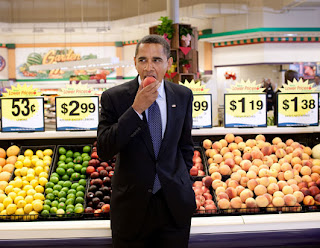 Religious leaders and Paul Krugman have called on Obama to tackle health care as a moral imperative. Frankly, I don't think Americans care much that others don't have health care, especially the ones who oppose reform. They are the bootstrappers--if you don't have health insurance, it's your own fault. Selling health insurance reform as a moral obligation is a good tactic with religious leaders, but it's not a good overall strategy.

On a conference call with 140,000 people today, Obama said reform doesn't fund abortions and it doesn't give healthcare to undocumented workers, contrary to what RNC's Michael Steele and every other republican is saying. Republicans don't know how to oppose anything without deceit as far as I can tell.

But I sense a shift in the debate. I think those who support reform have seen and heard enough from the opposition (and have been sickened along the way) and are now in gear. People are rallying again. Now the democrats need to get it together to come up with an awesome health reform bill.

The president directly addressed a number of pervasive rumors about his proposals.

These fabrications, Mr. Obama said, are distracting the country from its "core ethical and moral obligation... that we look out for one another."

"In the wealthiest nation on earth, we are neglecting to live up to that call," he said.

After kicking off the conference call with a prayer led by Dr. Cynthia Hale, senior pastor of 6,000-member Ray of Hope Christian Church in Decatur, Georgia, religious leaders echoed the president's message that there is a moral imperative for health care reform.

Rev. Jim Wallis, president of Sojourners, one of the groups sponsoring the initiative, said he has been "deeply concerned" by the shouting and hostility at town tall meetings. He said the fatih community is putting out "a clear call for truth telling" in the health care debate, and is "calling on people of faith to make our political representatives understand the faith community will be satifisied by nothing less than accessible, affordable care for all Americans." CBS

Tomorrow, Obama will conference on health care with the peeps at 2:30 pm.
Update Aug. 20: Nancy Snyderman also thinks Obama should argue the morality of health care. Ha! The skeptic in me has arisen. Obama telling people what's in it for them is the best way to sell reform. If we morally cared about people in a way that called for individuals to sacrifice, we wouldn't have people who are homeless and health care would've been taken care of a loooooong time ago. I don't agree with the token republican strategist, who says Obama is talking to religious leaders because he's desperately seeking a miracle: