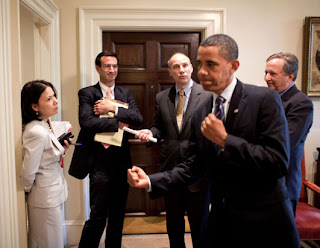 The WSJ this morning says a Sept. 15 deadline has been set for the Senate Finance Committee to come up with a bipartisan bill:

The six negotiators are working against a Sept. 15 deadline to reach a deal before Democratic leaders give up and move ahead with a partisan bill. A conference call went until nearly midnight Thursday with no major breakthroughs.

The committee is the only one working in a bipartisan fashion. I think the republicans will be happy if the deadline is missed. They will be glad to be relieved of healthcare. Republican involvement has been a joke to this point with death panels and all. Even if I was aligned with republican philosophy, I wouldn't proclaim myself a republican because I wouldn't want to be associated with a group of neanderthals. They're so talented at exploiting people.

The democrats need to become more confident in what they're proposing. They need to make sure that health reform is real reform, that does what it's supposed to do and that it doesn't bankrupt the country. If they were confident in what they were offering, then they'd be more aggressive, which leaves me wondering: do they believe in what they're selling?
There has to be a way to accomplish Obama's health reform goals, but I'm not sure the democrats have the answers right at this moment. Unfortunately, the republican trolls took a legitimate debate off the table for selfish purposes --power. That's offensive and loathsome to me.

President Barack Obama is likely in September to end Democratic efforts to work with Republicans on health-care legislation and press for a party-line vote if the stalemate on the issue in the U.S. Senate persists, a person close to the White House said.

The president and his advisers have started devising a strategy to pass a measure by relying only on the Democratic majority in each house of Congress, said the person, who spoke on condition of anonymity.

In a separate interview, former Senate Democratic Leader Tom Daschle said Obama is losing patience with negotiations between three Democrats and three Republicans on the Senate Finance Committee, the only congressional panel seeking a bipartisan consensus on a plan to remake the nation’s health- care system.

“He’s waited and waited,” Daschle said yesterday after meeting with the president. “He has indicated, much to the chagrin of people in his party, that virtually everything’s on the table. And he’s gotten almost nothing in return for it.” Read the rest at Bloomberg

Daschle said the president continues to hope that Republican Senators Charles Grassley of Iowa, Mike Enzi of Wyoming and Olympia Snowe of Maine will support his agenda, as a result of their talks with finance panel chairman Max Baucus, a Montana Democrat.

Yet Daschle said, “there’s a realization that we have to be prepared for a Plan B” -- a legislative maneuver known as reconciliation.

That process allows the Senate to pass, with 51 votes instead of 60 typically needed for contentious legislation, measures intended to cut the federal budget deficit either through spending cuts or tax increases.