But though it is Ted Kennedy's historic body of achievements we will remember, it is his giving heart that we will miss. It was the friend and colleague who was always the first to pick up the phone and say, "I'm sorry for your loss," or "I hope you feel better," or "What can I do to help?" It was the boss who was so adored by his staff that over five hundred spanning five decades showed up for his 75th birthday party. It was the man who sent birthday wishes and thank you notes and even his own paintings to so many who never imagined that a U.S. Senator would take the time to think about someone like them. I have one of those paintings in my private study — a Cape Cod seascape that was a gift to a freshman legislator who happened to admire it when Ted Kennedy welcomed him into his office the first week he arrived in Washington; by the way, that's my second favorite gift from Teddy and Vicki after our dog, Bo. And it seems like everyone has one of those stories — the ones that often start with: "You wouldn't believe who called me today." Read Obama's eulogy here.

Kennedy's gifts to Obama: A painting (not necessarily this one) and Bo 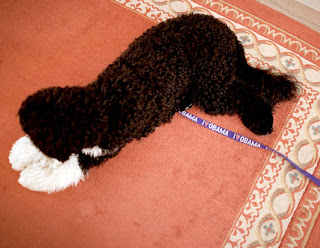