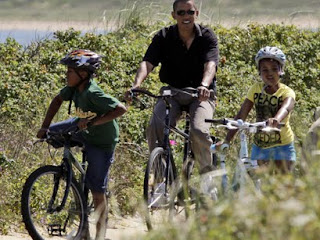 Back in DC, Obama plans some more off time this week:

"The president will continue his vacation through the end of the week,'' the White House press secretary announced this evening -- with a note that the media will be informed "if any public events are added to the schedule.''

The White House already had said toward the end of the Obama family's week of vacation that they would head to Camp David in the Catoctin Mountains of Maryland later this week and spend some of the Labor Day weekend there -- Thursday through Sunday at camp. But a spokesman had said some events in Washington were planned Wednesday. Swamp