Obama to Speak at Kennedy's Funeral In Boston Aug. 29 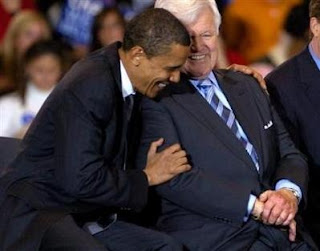 The funeral mass at Our Lady of Perpetual Help Basilica in Boston will be 10:30 am to 12:30 pm eastern. All the TV networks will be covering the funeral. Not sure yet when Obama will speak. At 5:30 pm eastern, the funeral service will be held at Arlington National Cemetery.

President Barack Obama will deliver a eulogy at US Senator Edward M. Kennedy's funeral Mass on Saturday, a White House official has told the Globe.

Kennedy's funeral will be held at a time yet to be determined Saturday morning at The Basilica of Our Lady of Perpetual Help in the Mission Hill section of Boston. Commonly known as the Mission Church, the 1,450-seat basilica on Tremont Street was built in the 1870s. Kennedy prayed there in 2003 while his daughter, Kara, was being treated for lung cancer. Read more at BG