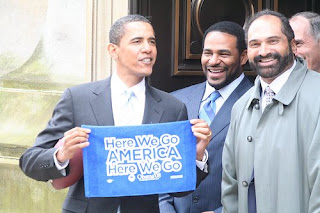 obama and some of the pittsburgh steelers

paul tewes, who led iowa, is taking over in pennsylvania.
Paul Tewes, who directed Obama's impressive win in the Iowa caucuses, will take over the Pennsylvania campaign from Jim DeMay, according to campaign sources. Tewes could not be immediately reached for comment.

Obama's national campaign has come under criticism from supporters that his defensive strategy in Pennsylvania -- designed largely to limit Hillary Clinton's ability to run up her popular-vote total -- was tantamount to conceding the state.

Who Can Beat McCain?