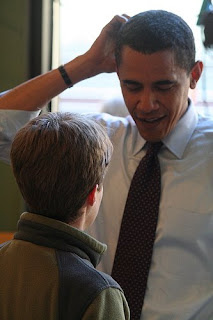 here is some of what obama said from the Q&A portion at a rally this morning in medford oregon.

a woman asked: how do you keep your composure given the ups and downs in the media.
he said the media is kind of like a funhouse mirror. sometimes it makes you look bigger than you are and sometimes smaller.
he also says he focuses on the work and doesn't take it personally. it's about the work of the american people, he said.
his 9 year old and 6 year old daughter also keep him in line.

a woman asked what he believed on funding on IDEA (i had no idea what this was, obama did, but it is special ed funding). he says he believes in fully funding special education.

he says we need to increase mileage standards to 40 mph.
longterm, the answer is reducing the demand.
we need to have and environmental department that believes in protecting the environment. have both departments (environmental and department of the interior) use science, not politics, as a way to makes decisions.
bring all the parties together with the guiding principle of sustainability.
stem cell research: "i am a strong supporter of stem cell research."
science can help us make good decisions.

ultimately, america's success is going to depend how well we are going to treat each other. that was the broader point of his speech. he said that he's not just being idealistic. it's these divisions each political cycle that are distracting us. talking about gay marriage when we should be solving the economic problems. talking about immigration from a race persepective instead of solving the problem.
General Election Map and Calculator
Obama: the Un-Beholden President
Bill Richardson’s Endorsement
Posted by Olga at 10:57 AM