The Hopefulness of Obama 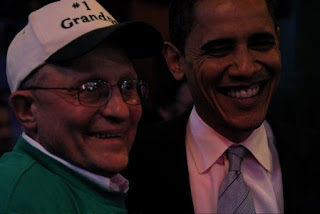 obama and someone's grandpa in scranton

not to be dramatic or anything, but does it occur to anyone that this election has come down to a contest between good and bad? note, i didn't say evil and i'm really talking about character and levels of optimism.

the bad isn't necessarily clinton, although she's been quite poor of character. the bad are all those who people can't see one beautiful speech for what it's worth. they have to sully it all up just for their purposes.

the nation: "With the hope and everything else he stands for, this guy is one very strong character. " read on.

the nation: His words should discourage the media frenzy of fear-driven gotcha. His speech in Philadelphia on Tuesday may also make the Clintons re-think their unsubtle exploitation of racial tension. But nobody knows the depth or strength of the commonplace fears streaming through the underground of public feelings. No one can be sure of what people will hear in Obama's confident embrace, beckoning Americans in all their differences, leaving out no one, to a better understanding of themselves.

The essence of the blues, as I learned to understand, is what Barack Obama accomplished in that speech--the beautiful and hopeful wrapped in pain and sacrifice, the despairing truths about the black experience in America that mysteriously exalt the human spirit when we hear the music. We don't need to understand why or define the meaning. In this case, Obama himself is the expression of what we are feeling. His speech will live on as a complex, exalting memory, whatever happens, because what he said about us is true.

Remember, this is a very shrewd politician, not just highly intelligent and worldly, but wise about himself. He must have understood fully the nature of what he was doing in this speech because all of his life he has coped successfully with the dangerous cross-currents of race. In that speech, Obama was taking all the risks onto himself, going where no one had dared to go before in politics with awareness he might personally pay a price. That is what leaders do, isn't it?

First, Barack Obama did not speak to Americans as though we are children. His discussion assumed that people could relate to a sophisticated explication of the American experience. He did not repackage the realities of race into uplifting myths. Above all, he did not leave anyone out of this generous approach, not his white grandmother for her folk fears of black strangers, not the cruel narrative of the African-American struggle, not the white working class whose immigrant stories have their own legacy of suffering and resentment. Nor would he renounce his friend and mentor Jeremiah Wright, the minister who expresses deeply felt anger and disappointment at the American story.

If you understand the risks Obama undertook, you can see the beauty and pain in what he did. He could not back away from the risks without betraying himself and all those people who are part of him. On the other hand, he was putting at risk his own great promise as a politician. In psychological terms, what's extraordinary is his refusal to split off himself and his own experience from those others. So he embraced them, knowing the risks. Then he tells us--audaciously--that we are capable of doing the same. Yet most of us do the opposite in everyday life, defining ourselves in contrast to the others we are not, idealizing our own selves by demonizing the others. Obama knows all this. He still insists we can do it. He has seen it happen in life.

Could Obama be right about Americans? The proposition itself is thrilling to hear. We feel ennobled by his hopeful account of who we are, but also a little scared. Obama didn't let anyone off the hook. He threw the choice back at the people. But what if he is wrong? We are scared to find out. His hopefulness makes us feel nervous for him. more

PS: obama will be on CNN tonight with anderson cooper at 10 eastern.
Posted by Olga at 1:18 PM