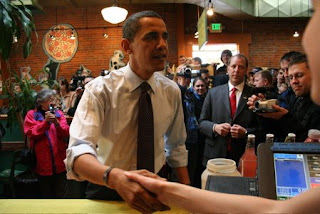 the deadline to register as a democrat is march 24 in pennsylvania and records are being set. obama could do better than expected in this state if new voters get to the polls. many of the typical voters in pennsylvania apparently are clinton (bill) supporters.
bill --that's my new theory on the support of the "budweiser" class for clinton. they won't vote for obama because he's black but they like bill, the emergency back up system.
LA times:

With time running out, the Obama campaign is engaged in a house-by-house appeal.

While Harrison and other volunteers often get a cool reception, there are some signs of progress. Statewide, the number of Pennsylvanians switching affiliation to the Democratic Party has boomed, with 57,651 signing up this year through March 14.

There is no way of knowing whether these voters are jumping to the Democratic Party to vote for Obama, but his campaign hopes that is the case. If turnout for the primary is 50%, as some analysts expect, these new converts would account for about 3% of the total vote -- and presumably a larger share of Obama's tally.

And the trend has accelerated. More than 22,000 registered as Democrats during the week of March 10, compared with 7,223 in the entire month of January.

"I've never seen numbers like this in one week," said Leslie Amorós, a spokeswoman for the Pennsylvania Department of State.

For Clinton, Pennsylvania is a must-win. With 158 delegates, the state is the largest of the 10 that have not yet voted. After nearly three months of primaries and caucuses, Clinton trails Obama by about 120 delegates.