Obama to Speak at University of Michigan Commencement May 1 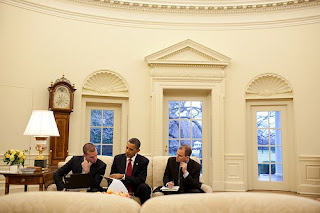 Obama and his speechwriters
Updated May 1: Video of Obama's full speech here.
Update April 28: Big Ten will live stream the speech at 10:30 am eastern.
Obama will be the fourth sitting president to speak at the university's commencement. From U of Michigan:

President Obama will receive an Honorary Doctor of Laws Degree.

“President Obama has captured the imagination and enthusiasm of many students with his inspiring words of hope and change. We are honored to welcome a leader of his distinction and look forward to his message,” Coleman said. “We could not be happier for the graduates who will celebrate their academic achievements with the president of the United States.”

The ceremony will be held at 10 a.m. May 1 in Michigan Stadium. The university awards degrees to about 3,500 undergraduate students at spring commencement, before an audience of more than 40,000. Ticket information will be released at a later date.

Obama delivered his first State of the Union speech in January after completing his first year as the 44th president of the United States. His speech focused on the economy, jobs and the importance of establishing and supporting small businesses. The state of Michigan, which has one of the highest unemployment rates in the country, is trying to reinvent itself in the wake of the auto industry’s transformation.