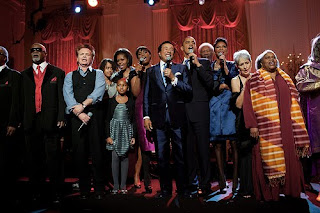 The President has no scheduled public events on Saturday.

On Sunday, the President and First Lady will welcome the National Governors Association to the White House for the 2010 Governors' Ball. The President will deliver toast remarks. The Vice President and Dr. Jill Biden will also attend. The evening will feature a performance by Harry Connick Jr. There will be a pool spray of the President's remarks. 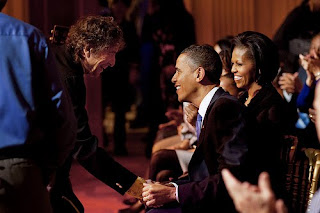 Also on Sunday, the First Lady will give a group of Washington, DC music students a special preview of the talent performing at the White House's annual Governors' Ball. The 3:00PMEST event will feature Mrs. Obama giving welcoming remarks and turning the program over to Grammy Award Winning artist, Harry Connick Jr. who will discuss with students his visit to the White House and his career advice for them. Harry Connick Jr. and a few residents from the New Orleans Musicians' Village will close out the event by performing a song. The Musician's Village was conceived by New Orleans native Harry Connick, Jr. in the wake of Hurricane Katrina to rebuild homes for many of New Orleans cherished but displaced artists, those who have defined the city's culture and created the sounds that have shaped the musical vernacular of the world.

For the week ahead:

On Monday, the President will meet with members of the National Governors Association at the White House.

On Tuesday, the President will attend meetings at the White House.

On Wednesday, the President will address the Business Roundtable at the St. Regis in Washington, DC. Later, he will participate in a credentialing ceremony for foreign ambassadors at the White House.

On Thursday, the President will host a bipartisan meeting at the Blair House to discuss health reform legislation. The session will begin at 10:00AM EST. President is inviting the most senior House and Senate bipartisan leadership, as well as the chairmen and ranking members of the committees that oversee health insurance reform legislation in both chambers. The President also has invited the Republican and Democratic Congressional leadership to designate an additional four Members to attend the meeting and be available to participate. In addition to the President, attending and participating on behalf of the Administration will be the Vice President, Health and Human Services Secretary Kathleen Sebelius, and Nancy-Ann DeParle, Director of the Office of Health Reform. The meeting will be pooled for TV in its entirety with pool sprays throughout the day. It will also be streamed live on www.WhiteHouse.gov.

On Friday, the President will attend meetings at the White House.

Also ahead, Obama is expected to post the healthcare plan going forward. Not sure if it's going to be pieces he wants included or pieces up for conversation on Thursday, but something's going to be posted at WhiteHouse.gov
Posted by Olga at 8:24 AM