Mentally Ill Man Gets Close to Biden at Olympics 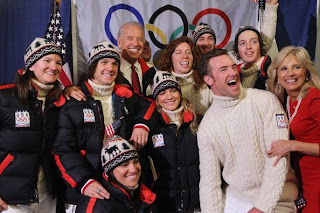 Joe and Jill hanging with the snowboarders
Apparently, while infatuated with Joe, the man didn't want to harm Joe:

A mentally ill man with a homemade security pass was able to get within metres of U.S. Vice President Joe Biden during a security breach at the Opening Ceremony of the 2010 Winter Olympic Games, CTV News has learned.

As dozens of police held back thousands of protestors outside of BC Place in Vancouver, a 48-year-old British Columbia man slipped past several layers of security inside the venue, said RCMP Assistant Commissioner Bud Mercer, the head of the 2010 Integrated Security Unit (ISU).

"He had an infatuation with the US Vice President." CTVBC