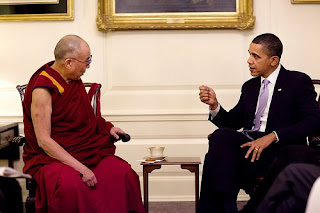 Obama met with the Dalai Lama today and the Dalai Lama will later meet with Hillary and then he's expected to answer press questions. Obama is now headed to Colorado. After that, he'll head to Lost Wages for a private fundraiser.
Fox's Major Garrett says the Dalai Lama "flicked" snow at the press. I'd like to throw a few snowballs:

It turns out Dalai Lama was more intentional:

Upon inspection, Dalai Lama made a tiger paw in the snow pack, in honor of Chinese New Year, year of the Tiger.

Gibbs says POTUS expressed "strong support for the preservation of Tibet’s unique religious, cultural and linguistic identity..." (more Gibbs)"...and the protection of human rights for Tibetans in the People’s Republic of China" (note: Tibetans IN China.)

My sentiments exactly.
The Dalai Lama feeding the birds: