Obama Announces What's Next for Health Reform Next Week 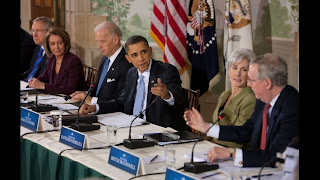 Yesterday's health reform meeting
Obama will announce next week the plan going forward. It sounds like it's going to be reconciliation, the process that would block a republican filibuster and require only 51 votes. Steny Hoyer on reconciliation:

"Since 1980, I think reconciliation has been used 22 times; 16 by Republicans; more than two-thirds of the time; that's probably 70 percent of the time. For their tax bills, welfare reform, other pieces of legislation. And they act as if somehow this is a process that should not be used." NPR

Today, Nancy Pelosi is pushing reconciliation. Sometimes Pelosi appears flimsy, eccentric and just plain weird, but when she wants to get something done, she can be very effective. But democrats are still noodling around.
Reconciliation isn't for the entire healthcare bill. It looks like the House needs to pass the Senate bill and then certain fixes are made through reconciliation: