White House Gets More Transparent with Visitor Logs and Declassification 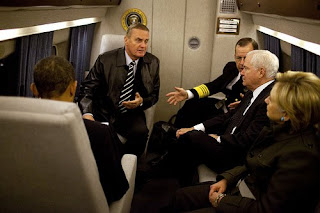 Obama and national security team
According to Obama's policy set forth earlier this year, Obama is making good on his promise of transparent government, releasing names of visitors. These visitor logs have gotten wingnuts out of sorts because they've made stupid assumptions about the names on the list. But if you want to peruse the list for yourself, visit here. Remember, some of the names, such as Bill Ayres, isn't THE Bill Ayres. Don't jump to conclusions.

President Barack Obama on Tuesday ordered the federal government to rethink how it protects the nation's secrets, in a move that was expected to declassify more than 400 million pages of Cold War-era documents and curb the number of government records hidden from the public.

Among the changes is a requirement that every record be released eventually and that federal agencies review how and why they mark documents classified or deny the release of historical records. A National Declassification Center at the National Archives will be established to assist them and help clear a backlog of the Cold War records by Dec. 31, 2013. More at MSNBC